Reasons Why Ghanaians Voted For Changed, From NDC to NPP? [Audio] 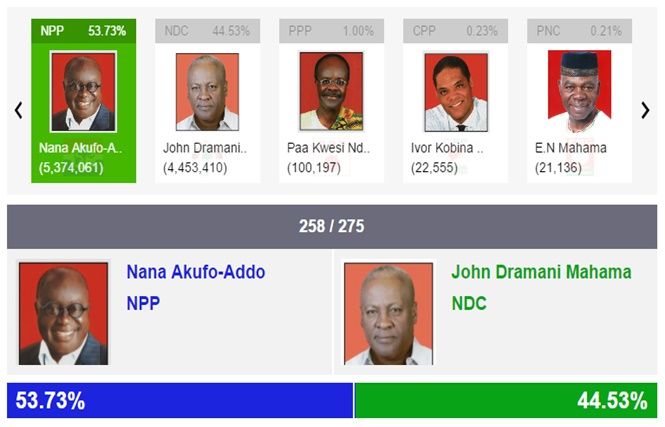 Credible information reaching GhanaPa.com indicates that, the good Ghana, Ghanaians were looking for, cause them to form mutually exclusive choices in particular syntactic roles for political paradigm shift.

According to GhanaPa.com analyst, things that gave rise to an action of change of government, phenomenon called for transition in the history of Ghana as never before can be seen in any of the following political mirrors.

The President-elect Nana Addo Dankwa Akufo-Addo and NPP gave almost a total of 16 plus promises.

Nana Akufo-Addo and NPP assured Ghanaians their promises will make Ghana a better place for all of us.

1. Light bills will go down.

2. Taxes will also go down –
“Abolishing of import duties on raw materials and manufacturing equipment, and the reduction of corporate income tax from the current 25% to 20%, to make sure that Ghanaian enterprises are competitive.”


5. $1 million dollars per constituency (275 constituencies) to boost development in Ghana.

7. One district, one factory – “We have completed the surveys, and already at least 300 projects have been identified across the 216 districts of Ghana.”

8. Nana Addo promises to eliminate corruption in Ghana if he becomes president.

9. Majority of Ghanaians will feel a change in their lives.

10. Agriculture Transformation – “The role of agriculture in transforming any economy and nation is vital, so our efforts must be directed to this sector”

“The production of cash crops such as cotton, oil palm and cashew will receive major attention from my government. Maize production will also be given a major boost.”

11. Nana Addo promises his government will not “witch-hunt” NDC officials but fight corruption.

“I am fully committed to pursuing ‘an anti-corruption drive across-the board,’ as you put it, which will be fully anchored in the rule of law and strict respect for due process. That is the best form of security for every citizen of the country,”

12. Nana Addo promises rubber processing factory for Ahanta West:
He made the promise while speaking to the chiefs and residents of Ahanta West as part of his tour of the Western Region.

“We want to boost the Agric sector. Every district has something we can work with. That is why we say one factory, one district. This will not be difficult to do here in Ahanta West because we have a lot of resources.”

“We are coming to put up a rubber processing factory here so that people can get jobs to do. We will also restart the outgrowing scheme we introduced under the Kufuor administration which has collapsed today. We will restart the scheme for rubber producers to also get some money, as well as farmers,” he said.

13. Health insurance scheme is coming back according to Nana Addo and NPP.

14. Nana Addo promises to establish Aluminium Industry – his administration would oversee the mining of the vast and untapped bauxite deposits in Kyebi, Atiwa plains and Nyinahin, and through the building of an integrated aluminium industry, add value to the country’s bauxite deposits.

15. Unemployment – “We will create jobs for the youth – Nana Addo promises”


17. Region creating, Western North Region, Oti Region – “I assure you that when I win this year’s elections, the creation of the Oti Region will be done according to Nana Addo.”

May ELOHIM help the President-elect Nana Akufo-Addo with divine speed of wisdom that can make him and his administration to accomplish all these promises.

Listen To Audio About Woyome Scandal Below: