Russia’s impressive start to the World Cup ended as they had a man sent off and were easily defeated by Uruguay, whose victory means they top Group A.
Uruguay will go on to face Portugal in the last 16, while hosts Russia play Spain.

There was a party atmosphere around the scorching Samara Arena before kick-off, with fans having travelled from all over the country keen to share in the good feeling surrounding their national team.

Russia had scored eight goals in sweeping victories over Saudi Arabia and Egypt and were already guaranteed to progress, but they went behind in their final group match after only 10 minutes when Luis Suarez drilled in a clever low free-kick.

It got worse for Stanislav Cherchesov’s side when a Diego Laxalt effort from 25 yards was deflected in by Denis Cheryshev, leaving his keeper Igor Akifneev stranded and in the position of having conceded three goals at the tournament without making a save.

Akinfeev did then come out to block a Rodrigo Bentancur chance, with Roman Zobnin just scrambling the rebound clear of Edinson Cavani, before Igor Smolnikov picked up a second yellow card and was sent off 35 minutes into his World Cup debut.

After the break, Russia’s 10 men composed themselves and at least managed to wrest back some control of the match, with Uruguay always looking dangerous but perhaps happy to concede possession and protect their lead.

The hosts were rewarded with their best chances of the match, the first to Artem Dzuba, who fired wildly over the bar from inside the box, the second by Fedor Smelov, who dazzled to find space in behind the Uruguay defence but failed to pick out a team-mate with what looked to be an easy cut-back.

But the final word was left to Cavani, who put several earlier misses behind him to get his first goal of the tournament by stabbing in from close range after an Akinfeev parry, ensuring Russia finished as runners-up.

You could say this was the first time Russia had faced quality opposition at this tournament, and for many the manner of this defeat will mark them out as vulnerable in the next round.

Almost every set-piece was delivered too long, and there were so many key sloppy passes – like Yuri Gazinskiy’s to begin the passage of play that led to Suarez scoring from a free-kick – or Mario Fernandes’ when for once early in the second half Uruguay looked like they might be opened up.

Perhaps the fact that Russia, the lowest ranked team here at 70 in the world, started this game having already qualified affected their approach. Perhaps it was the oppressive heat. Midfielder Aleksandr Golovin, one of their best performers here so far, was also rested.

What is certain is that now, having finished second, Russia will play their next match at Moscow’s Luzhniki Stadium, where they beat Saudia Arabia 5-0 in the tournament’s opening match. It will be another sell-out partisan crowd.

Their opponents there will be Spain – with the 2010 World Cup winners secure their place as Group B winners with a draw against Morocco.

Suarez free-kick gives Uruguay early lead
There was very little doubt about who would win this game after an early period in which Russia were blown away.

Suarez looked determined to impress after his poor opening match against Egypt, and it was his clever low free-kick that set the tone for what was a very comfortable victory.

There was plenty of noise from the stands – so Uruguay goalkeeper Fernando Muslera will have had many quieter games in terms of volume – but he had little work to do as he became his country’s all-time leading appearance maker at the World Cup.

At his 14th match at the tournament, and on the occasion of his 100th cap, Uruguay simply out-performed Russia, and of course were for much of the game a player better off.

There was even finally a goal for Cavani right at the end. For a long time it looked like it would not come as the Paris St-Germain striker endured a mostly frustrating evening.

He missed three good chances before finally things fell into place as the rebound from an Akinfeev parry landed kindly at his feet.

The Uruguay fans stayed long after the final whistle to cheer their team. For them it is three wins from three, but their next match will be a much more serious test. 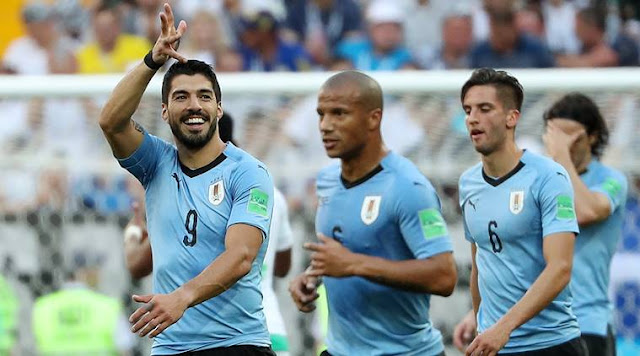 Barcelona striker Luis Suarez (Left) moved one goal behind Uruguay’s record goalscorer at the World Cup, Oscar Miguez, with his seventh in total and his second in Russia this summer.

Barcelona striker Luis Suarez moved one goal behind Uruguay’s record goalscorer at the World Cup, Oscar Miguez, with his seventh in total and his second in Russia this summer

‘We could have won by more’ – what they said

Uruguay coach Oscar Tabarez: “Russia did not push us around, they tried to put us into a corner. Not only did we prevent them from doing that, but we put them in their half of the pitch in the first half. We could have won by even more goals.

“We did not manage to score on certain counter-attacks that we should have. Sometimes the timing wasn’t perfect. We need to improve very quickly, because any match in the round of 16 will be extremely difficult.

“The result and to be top of our group pleased me most. We won by a wide margin but I like the fact that we didn’t concede. We need to work towards that end. And I liked the dedication and concentration that my team had. They were focused from end to end, the entire squad. They executed the plan.”

Russia coach Stanislav Cherchesov: “Even when we had 10 people on the pitch, they were running hard and they wanted to attack more. That’s why I brought on a substitute.

“Psychologically, we are well prepared for the next games.

“This is one thing and when you come to the pitch to play the game it’s another. This is an art to be prepared at any second.” 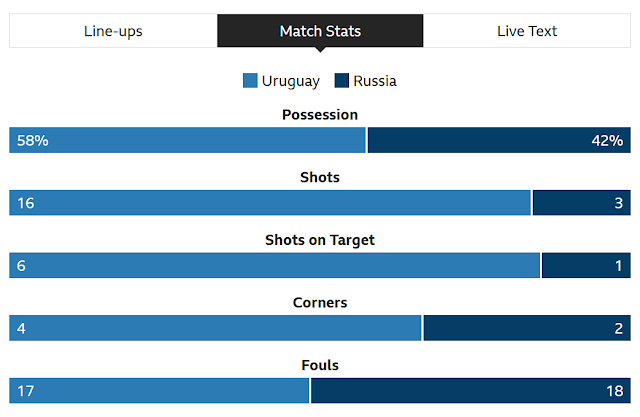