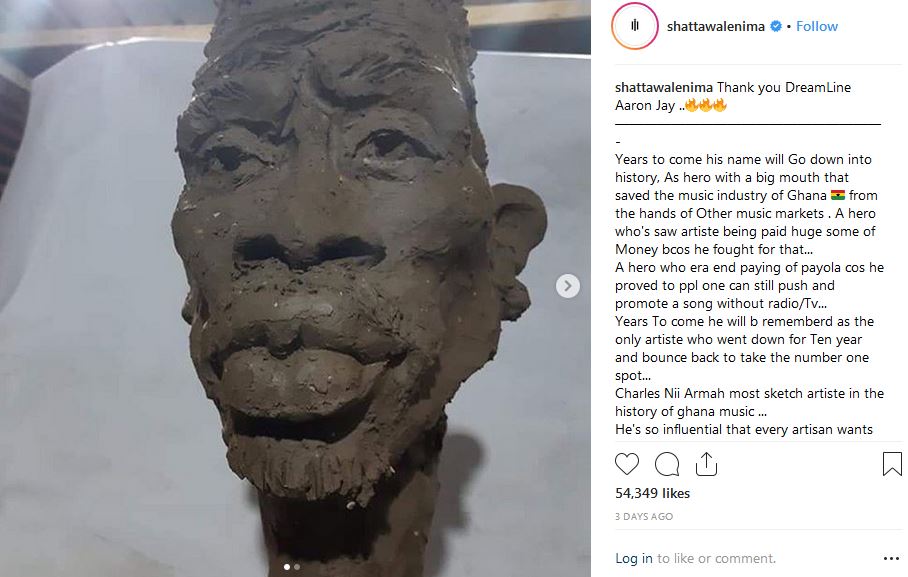 A Sculptor who was identified as Stephen Allotey, who is said to be an alumni of Takoradi Polytechnic designed a very handsome sculpture of dancehall musician, Shatta Wale.

The peculiarity of the sculpture made it to go viral on social media with a lot of folks sharing their opinion on it.

Some people were of the view that Stephen Allotey didn’t try with how he designed the mouth of our only African Dancehall King.

Shatta Wale who spotted the viral sculpture finally reacted to it in an unbelievable way.

The Dance-hall king took to IG and captioned the ‘Handsome’ sculpture with the following words:

‘Thank you DreamLine Aaron Jay ..🔥🔥🔥
———————————————————-
Years to come his name will Go down into history, As hero with a big mouth that saved the music industry of Ghana 🇬🇭 from the hands of Other music markets . A hero who’s saw artiste being paid huge some of Money bcos he fought for that…
A hero who era end paying of payola cos he proved to ppl one can still push and promote a song without radio/Tv…
Years To come he will b rememberd as the only artiste who went down for Ten year and bounce back to take the number one spot…
Charles Nii Armah most sketch artiste in the history of ghana music …
He’s so influential that every artisan wants to try their hands on his image.
21 Gun salute to The living legendShatta waleeeee! paaa paaa paaa!!!🙌.’