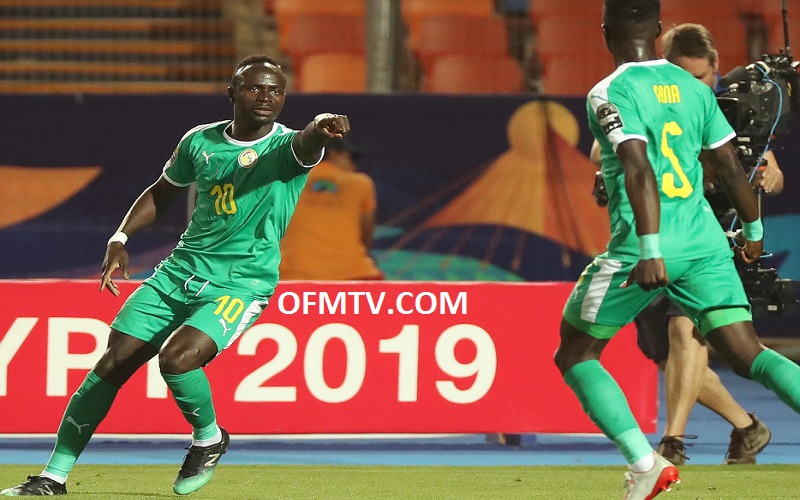 Senegal became the second side to reach the quarter finals of the ongoing Total Africa Cup of Nations 2019, beating Uganda 1-0 at Cairo International Stadium on Friday (5 July 2019).

Sadio Mane scored the only goal, his third of the tournament after 15 minutes and soar to the summit of the scorers chart. However, Mane was denied a brace when Uganda goalkeeper Denis Onyango saved his penalty on the hour mark.

Senegal will play the tournament surprise package Benin on Wednesday (10 July 2019) at the Cairo-based 30 June Stadium with a place in the semifinal at stake.

Senegal started the game on attacking note and had a corner after few seconds but Uganda captain and goalkeeper Onyango had no problem dealing with the ball.

And at the quarter hour mark, the Teranga Lions took the lead via Mane. A blunder from the Cranes defense saw the ball cut by Mbaye Niang who found Mane and the Liverpool star made no mistake as he went one-on-one with Onyango to score his third goal of the campaign.

Uganda had to deal with an early blow with defender Hassan Wassawa leaving the field injured after 18 minutes. But they could have found the equalizer after 23 minutes when Emanuel Okwi sent a scorcher that found the safe hands of Senegal’s goalkeeper Alfred Gomis.

Okwi once again came near to handing Uganda the equalizer from a corner kick that he met with a powerful header but it missed target narrowly at the half hour mark.

Ismaila Sarr should have doubled Senegal’s lead when he was on his way to target with only Onyango to beat, but the Ugandan goalkeeper was too strong to be deceived. The first half ended with Mane’s goal proving to be the difference between both sides.

Uganda resumed from where they stopped, and Faruku Miya free kick seven minutes after the break went just wide.

Mane had the chance to double the Teranga Lions lead at the hour mark when he won a penalty after being fouled by Onyango, but the Ugandan goalkeeper made amends when he stopped Mane’s shot from the spot. It was the second penalty miss for Mane in the tournament.

Mike Azira tried shooting from distance but without troubling Gomis after 72 minutes. The Senegalese goalkeeper was called back to action ten minutes from time but he proved up to Allan Kateregga’s shot from distance.

Senegal players tried to kill the game’s rhythm and they did what they needed to reach the quarterfinals where they face Les Écureuils of Benin.