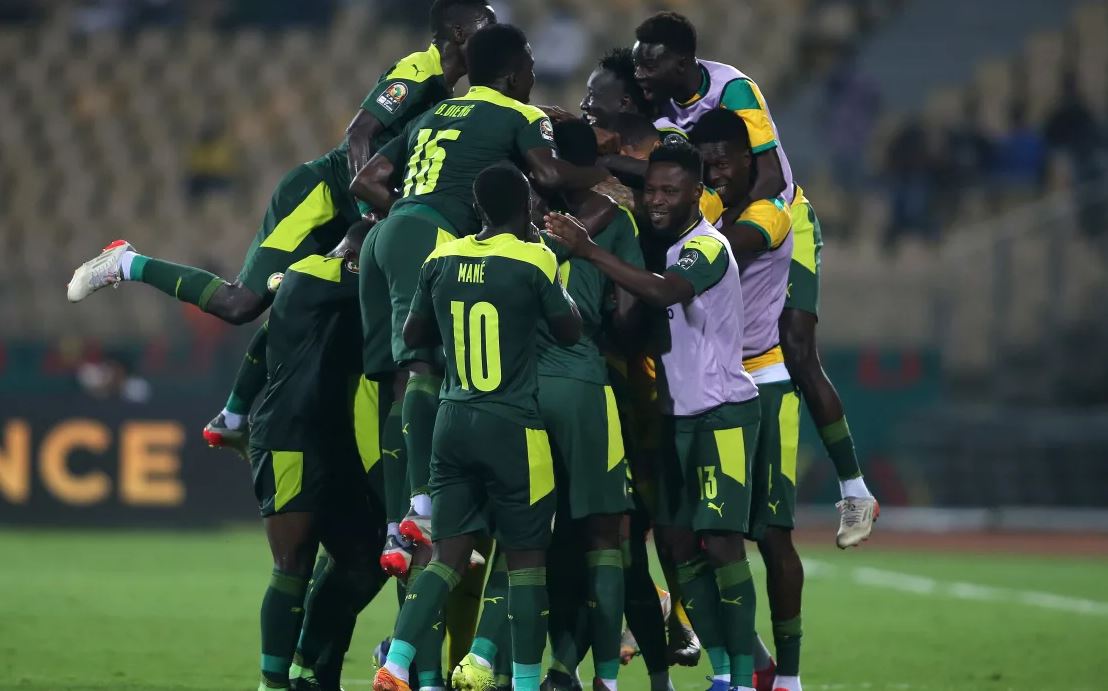 The Teranga Lions of Senegal produced a brilliant second half performance to beat Burkina Faso 3-1 to qualify into Sunday’s TotalEnergies Africa Cup of Nations Cameroon 2021 final.

Defender Abdou Diallo started the party for the 2019 losing finalists when he calmly slotted in from close range on 71 minutes.

The PSG defender kept his cool inside the Burkinabe box after Koulibaly’s volley fell on his path before guiding his shot past substitute keeper Soufiane Ouedraogo.
Saliou Ciss of Senegal challenged by Burkina Faso captain Bertrand Traore during the 2021 Africa Cup of Nations Afcon Finals Semifinal match between Burkina Faso and Senegal

The West African derby lived up to it’s billing at the Stade Ahmadou Ahidjo in Yaoundé with Senegal having two penalty claims turned down following VAR reviews.

With an eventful first half which saw the two teams cancelled each other in the middle of the park. Saliou Ciss came close for the Lions of Teranga with low fierce drive past Koffi’s far post on 14 minutes.

Edouard Mendy pulled a smart low save on towards his right to deny Burkinabe forward Hassane Bande seven minutes before the break.

The Stallions were forced to change their goalkeeper Kouakou Koffi following a collision with Senegal’s Cheikhou Kouyate.
Sadio Mane of Senegal challenged by Adama Guira of Burkina Faso during the 2021 Africa Cup of Nations Afcon Finals Semifinal match between Burkina Faso and Senegal

The second half saw both sides going for the breakthrough and it was the Teranga Lions who scored first through Abdou Diallo.

The young defender found the back of the net from close range before Cheikh Ahmadou Bamba Dieng doubled their lead from Sadio Mané’s clever cut back.

With time running out the Stallions pulled a goal back eight minutes from time when midfielder Ibrahim Blati Toure latched on to Issa Kabore’s cross.
Cheikh Ahmadou Bamba Dieng of Senegal celebrates goal with teammates during the 2021 Africa Cup of Nations Afcon Finals Semifinal match between Burkina Faso and Senegal

Kabore was picked out by captain and talisman Bertrand Traore on the right and the forward placed an inviting delivery towards advancing Toure to slot past Mendy.

The two-time losing finalists completed their task on 83 minutes through star man Sadio Mané. The Liverpool forward showcased his class with he stylishly dinked his effort past Soufiane Ouedraogo to send Senegal to their third TotalEnergies Africa Cup of Nations final.

Senegal will face the winner in the second semi-final between Egypt and hosts Cameroon in Sunday’s final at the Olembe Stadium in Yaoundé.