Profile and Biography of the late Joseph Henry Mensah Honourable Joseph Henry Mensah was a Ghanaian politician and economist who lived from 31 October 1928 – 12 July 2018.

He then headed to University of London then Stanford University, where he earned both a bachelor’s and master’s degree with specialisation in economic theory and development.

In 1954, Mr Mensah became a Research Fellow in Economics at the University of Ghana, which lasted until 1958.

He began working as an assistant inspector of taxes in 1953 while the Gold Coast was still under colonial rule.

In 1958, Mensah joined the United Nations Secretariat at the Centre for Development Planning, Projections and Policies, in New York City, United States.

Mensah returned to Ghana in 1961 as the Head of Agency at the National Planning commission.

In 1969, he was elected to parliament and became the Finance minister until 1972, when he was replaced by future head of state Ignatius Kutu Acheampong after the military coup.

Beginning in 1974, Mensah worked in the private sector both in Ghana and abroad.

He was imprisoned by the National Redemption Council from 1975 to 1978. Although banned from political activity in 1979, he was active for the Popular Front Party in the 1979 elections.

He also served as Chairman of the Sunyani District Council in Brong-Ahafo Region (1979–1981), and proprietor of Banka Farms. Exiled in England, in 1983 he headed a group opposing the PNDC.

He also served on the African Advisory Council of the African Development Bank from 1993 to 1997.

In December 1996, Mensah contested a parliamentary seat in Sunyani East District as a member of the New Patriotic Party, which he won.

Mr J.H. Mensah was 20 years old when the February 28, 1948 Crossroad riots started. And as a young, active boy who had just completed Achimota School, he could not help participating in the public demonstrations leading to independence.

Young as he was, he became so politically conscious that, not even did the shooting to death of the three ex-servicemen and a British, coupled with the curfews imposed in Kumasi, scared him from participating in the nationalist agitations.

In an interview with Augustina Tawiah in a publication in the Junior Graphic newspaper in 2007, Mr J.H. Mensah in his own words, said he usually attended political demonstrations uninvited. “I joined in agitations and marches on the streets of Kumasi. When the Big Six were arrested, I joined in the march that went on, with the aim of releasing them from prison.”

Little did that young boy who used to engage in political debates know that he was actually preparing himself for a career in politics.

“At that time, I never thought I would eventually go into politics. I thought I was trained only for academic and civil service careers,” Mr Joseph Henry Mensah, popularly called J.H. Mensah told the Junior Graphic.

Mr J.H. Mensah recalled that his interest in politics developed while he was in secondary school at Achimota. It was also the same period that the nationalist movements started, and “As a student studying history, geography and languages, I became an ardent follower of politics,” he said in the Junior Graphic interview.

Leaving school the same year that the United Gold Coast Convention (UGCC) was formed in 1947, gave him ample time to engage in many political activities.

Recalling his days at Achimota, Mr Mensah said he went to the school during the period of the Second World War. At that time, a university in Nigeria known as Yaba University, which was affected by the war, had its students evacuated to Achimota so they got to know a lot of Nigerians then.

Achimota school also had to give up the Western side of the school to the British Army. As a result, some students, including him were re-located to Aburi Gardens for a while.

Mr Mensah said at Aburi they had to descend into some valleys to fetch water from one of the wells known as Jamaica which was dug by the missionaries. This was difficult for them, but like any other child, he really enjoyed it.

During those days, young Mensah remembered that he was talkative and also temperamental. He knew his rights and firmly stood for them.

Mr Mensah said he was taught by Dr Ephraim Amu and Mr Philip Gbeho while at Achimota School and Dr K.A. Busia at the university and these teachers, according to him, inspired him a lot.

He also developed a keen interest in sports. He played hockey, football and cricket for his house. He was good academically but pointed out that he did not achieve that overnight.

According to him, as a child, he yearned to become a learned man so he always studied hard in order to be great.

Mr Mensah was born in Sekondi in October 1928. He had only started kindergarten at Sekondi when his father was transferred to Kumasi so he grew up in Kumasi.

Born to a father who was in the Gold Coast Civil Service and a mother who was a trader at the Kumasi Central Market, he said the family’s finances were manageable.

As a child, apart from waking up early to fetch water, he helped with household chores. During weekdays after school and on vacations, he used to help his mother who sold textiles, oranges and many other items in the market.

Sometimes, he had to carry oranges around to sell. But that did not affect his studies, because he provided enough time for that.

Young J.H. Mensah, attended St Peter’s Cathedral School, in Kumasi, and in those days, he said, he used to walk to school without any shoes on.

Mr Mensah is the third of 10 children. As children, they were all assigned responsibilities by their parents, and if one failed to execute one’s responsibilities, that person was punished accordingly.

After Achimota School, Mr Mensah went to the University of Gold Coast, where he studied economics. He was one of the pioneers of the university. While there, he used to go to Arena in Accra to listen to speeches by Dr J.B. Danquah.

He is also on record to be the first President of the Junior Common Room of the Legon Hall. From Legon he proceeded to Stanford University in the United Kingdom and later to California, USA for further studies.

It was while he was in California that Ghana attained her independence. Although he was not at home on that eventful day, he had the chance to broadcast to listeners in San Francisco on current affairs in Ghana.

Prior to his involvement in active politics, Mr Mensah worked with the United Nations.

Mr J.H. Mensah spent 13 years in political exile and four-and-half years as a political prisoner in the country. He has eight children.

10 things to know about JH Mensah 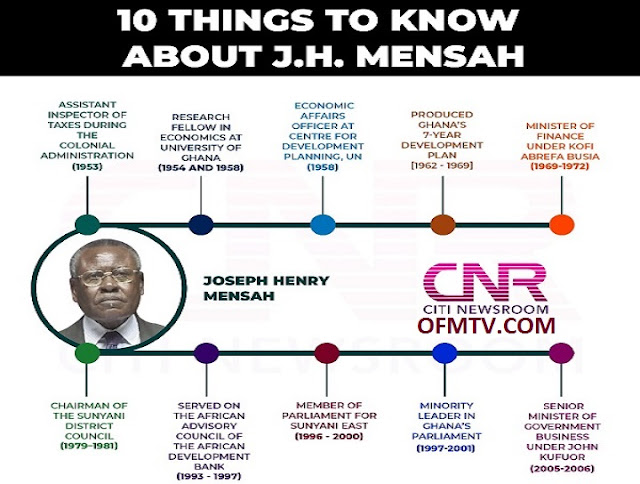