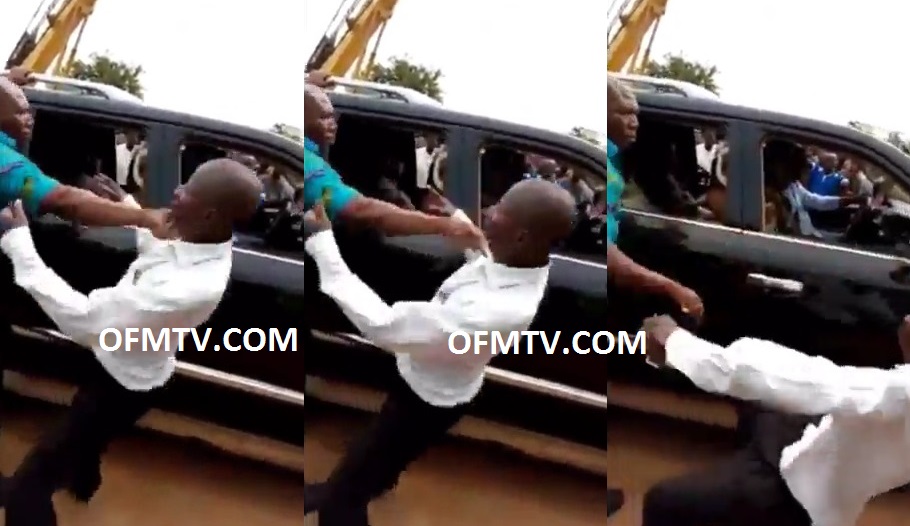 The next time you try to get closer to the President of Ghana, look carefully to ensure that all his bodyguards do not have their overprotective cloaks on before you venture.

Whether he is in a heavily guarded car or trotting on his feet to a destination, there is clearly no safe space for those who want a closer look.

The outcome may not be as pleasant as the citizen might anticipate.

That may have been the case of an old man who was brutally pushed and crashed to the ground by a bodyguard in a video that has gone viral on social media.

The event that warranted the President’s presence is still unclear, but the manner in which the older man was pushed by the hefty bodyguard was captured on a clear camera by an onlooker who stood at a safe distance, unlike the old man.

In the 33-second video, the old man is seen rushing toward the car as he shouts “Nana nie” in a clearly complementary fashion with an outstretched hand, suggestively to give the President a high five.

The sequence of his plot was immediately twisted as he was met with a push to his chest, closer to the hem of his neck, that sent him to the ground, and quickly back on his feet to avoid being passed on by the President’s car.

Other guards surrounded him and appeared to admonish his carelessness, instead of consoling or dusting the literal dirt and emotional shame off him. The frail man’s only offence was to seek a wave or perhaps a closer view of President Akufo Addo.

The President’s car moved on to more shouts of accolades from the crowd on the scene as the abused old man was left out of the rest of the video chronicle of events.

This will not be the first scenario of a commoner who tried to catch a closer glimpse of a powerful leader in any country.

However, this will surely go down in history as one of the worst civilian treatment of a commoner who was pushed away in the clear view of the president to pave way for his car.