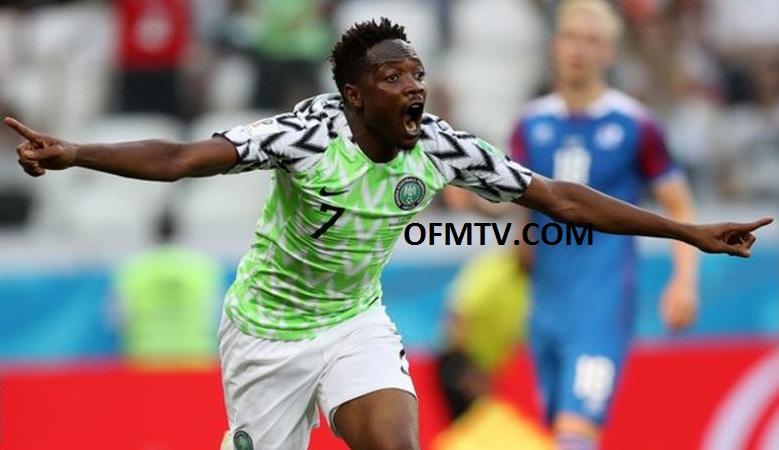 Ahmed Musa scored both goals as Nigeria swept aside World Cup debutants Iceland to leave Group D
intriguingly poised with one round of games to go.

The Super Eagles would have gone out with defeat but came good in Volgograd.

Musa showed superb technique to fire Nigeria ahead on the half-volley before
the Leicester player rounded keeper Hannes Thor Halldorsson to make it
2-0.
Iceland missed a late penalty – awarded after a video assistant referee review – when Gylfi Sigurdsson fired over.

The result gives a slight lift to beleaguered group rivals Argentina.
Victory over Nigeria in their final game would see La Albiceleste safely
into the last 16 – as long as Iceland do not beat group leaders
Croatia. In that event, goal difference would decide who progressed.

Victory in that game for Nigeria, on the other hand, would now guarantee their
progress. Having started the day bottom of the group, they find
themselves second – three points behind Croatia, who have already
qualified for the knockout stage.

Having gone down 2-0 to Croatia in their first game, Nigeria would have joined
African rivals Egypt and Morocco in exiting the tournament early if
they had lost here.
They started slowly, becoming the first team in Russia not to have a shot in the first 45 minutes.
Yet they were a different proposition after the interval as they went on to
secure only a second win in 14 games at a World Cup finals.
Musa, who ended last season at CSKA Moscow on loan from Leicester City,
proved the difference having been recalled to the team after the Croatia
defeat.

He showed exceptional quality to open the scoring, controlling a cross by Victor Moses before lashing home from 10 yards.
Having scored one of the goals of the tournament, Musa then hit the bar before
scoring his second after Iceland’s defence had gone walkabout.
That goal ensured he became his country’s all-time top scorer in World Cup games with four.
Nigeria still have to beat Argentina to make sure of extending their stay in
Russia but this performance, particularly in the second half, will give
the youngest side at the World Cup a huge lift for Tuesday’s group
finale.

Iceland went into the game having already tamed Lionel Messi – coming from
behind to draw 1-1 with two-time winners Argentina in Moscow – and
victory over Nigeria would have left them on the brink of the knockout
stage.
Instead the smallest nation ever to qualify for the
tournament are not in control of their destiny after wilting in the
Volgograd heat.
It had started well for Iceland, Sigurdsson
forcing two saves from 19-year-old keeper Francis Uzoho inside the
opening five minutes; as many shots on target as they managed in 90
minutes against Argentina.
Yet they faded and were distinctly second best after the interval.
Iceland were gifted a chance to score in the closing stages after Tyronne Ebuehi’s 80th-minute foul on Alfred Finnbogason.
But Sigurdsson’s penalty, awarded after a VAR review, summed up his country’s day, flying high and wide.

Who needs what to reach the knockout stage?

The last two games in Group D take place on Tuesday at the same time – 19:00 BST.
Croatia
– guaranteed a place in the last 16 after winning their first two games
but need one point against Iceland to guarantee finishing top.
Nigeria
– will join Croatia in the knockout stages if they beat Argentina.
However, a draw would be enough if Iceland do not beat Croatia.
Iceland
– must beat Croatia and hope Nigeria don’t beat Argentina. Goal
difference could prove vital and Iceland need a handsome win as Nigeria
can still advance with a draw.
Argentina – will advance if they beat Nigeria and Iceland don’t beat Croatia. Again, goal difference could be crucial.

‘This World Cup has come too early’ – what they said

Nigeria boss Gernot Rohr:
“What I like in my young team is humility, solidarity and fighting
spirit. I thought before this World Cup we were here to learn.
“I
think this team will be ready in 2022 and this World Cup is coming
early, but we have a good chance to win against Argentina.”
Iceland boss Heimir Hallgrimsson:
“It’s a strange fact that we are still in the race. We didn’t think we
would go through this World Cup without a loss and losses are always
difficult to swallow. But we can still go through.
“We’ve played
Croatia four times in four years and we’ve often said we’re like a
married couple trying to get divorced but we always meet up again.”

Nigeria’s
last game of the group phase is against Argentina in St Petersburg on
Tuesday (19:00 BST) while Iceland face group leaders Croatia in
Rostov-on-Don at the same time.