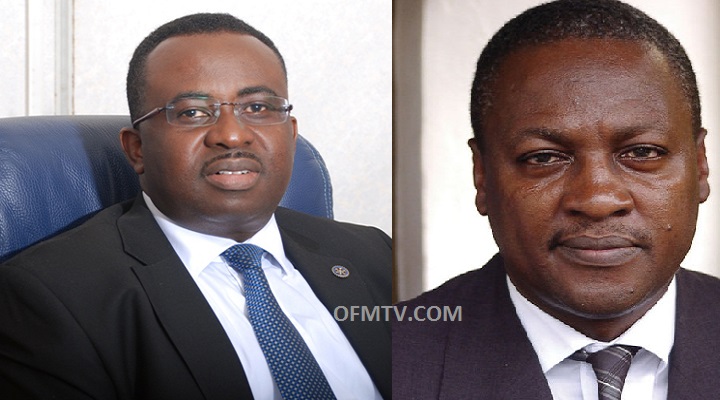 Former President John Dramani Mahama who is lacing his boots for a comeback in 2020, MyNewsGH.com can report, is keenly considering the choice of former Deputy Governor of the Bank of Ghana, Dr Johnson Asiama to partner him to win back power from the Akufo-Addo- Bawumia-led government in 2020.

A highly placed source near the former President an a player in his inner circle confirmed to MyNewsGH.com that it is settled that the former President will stage a comeback and part of a revision of strategy, he and a close circle deliberated on selecting four (4) personalities shortlist to partner the former President into the main elections. The list is supposed to be on standby and submitted to a committee that will sit right after the NDC Flagbearership race to choose one of them
Of this four names, Dr Johnson Asiama stands tall as a result of his age, general appeal, technocrat background, unblemished record and hailing from the Volta Region and our source confirmed Mahama himself likes the choice.

We have also been reliably informed that contender for the flagbearership position of the NDC, Dr Ekow Spio Garbrah has met secretly with Mr John Mahama asking for him to be possibly considered for the running mate slot when Mr Mahama is elected.

Other names on the list include a woman and a man from the Volta Region and Ashanti Region respectively who both served in the Mahama administration in important positions without blemish.
The former President Mahama we are informed, while he has his list, is open to leaving the entire decision for his choice of running mate to Founder of the party, John Rawlings to appease him and draw him to campaign for the party.

When this happens, insiders believe Rawlings will bring his daughter Zanetor Rawlings, who will make a play for the top job after Mahama, whether he wins in 2020 or not.

While tentatively the NDC was supposed to hold its National Flagbearership election in September, our source says this could be pushed to January 2019 while Mr Mahama is most likely the next flagbearer, he will be expected to announce his running mate ”by April 2019 to give ample time for zoning the country and campaigning across”.

It is being speculated that though the Akufo-Addo government is somehow ‘afraid’ of the candidature of Mr Mahama who has mass appeal among NDC diehards, the NPP intends to replay to voters the ‘old sins’ of Mr Mahama which includes corruption, loose-talk and impunity, to make him unappealing, but for this, our source said, “we are prepared for that, we know their plan already”.

It is perhaps in this sphere that the choice of Dr Johnson Asiama as a ‘clean’ running mate comes into the picture. Efforts by MyNewsGH.com’s Nana Yaw Adom to reach out to Dr Asiama proved futile as he was unable to respond.

Earlier, Spokesperson of the former President vehemently denied a statement that made the rounds on social media that former President Mahama will no longer be running again. That statement convinced many observers of the political scene that Mr Mahama’s comeback is cast in stone.
Our source disputed that the choice of Dr Asiama is a copy of the Akufo-Addo-Bawumia trick where Dr Bawumia was brought into the fold as  a technocrat and he dazzled voters with a breathe of fresh air and his economic analysis.