Mahama, Kufuor and Rawlings all eligible to contest for President – Dr Oduro Osae 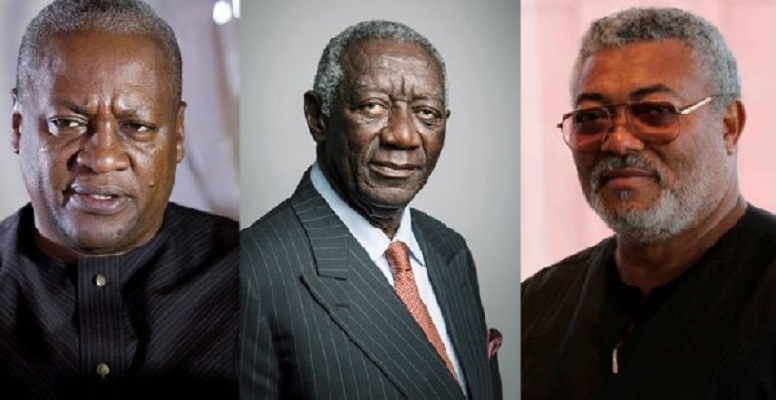 A lawyer and governance expert, Dr Eric Oduro Osae, has said his reading of the law makes it clear to him that ex-Presidents John Mahama, John Kufuor and John Rawlings can all contest for the high office of the land.

Dr Oduro Osae says the six months administration led by Mr Mahama prior to contesting in the 2012 general elections was not part of his term but rather a continuation of Late President John Mills’ term.

His comments come on the back of moves by the Ashanti Regional Chairman of the New Patriotic Party (NPP), Bernard Antwi-Boasiako, to block former President John Mahama from seeking another term in office.

Mr Antwi-Boasiako, who popularly known as ‘Chairman Wontumi’, said on Adom FM’s current affairs show, Burning Issues on Monday, December 10 that “John Mahama has already served two terms in office per the 1992 Constitution and serving another term in office will make it his third which contravenes the law.”

But commenting on the issue on the same show, Dr Oduro Osae explained that ex-President Mahama can run for two other terms according to the Constitution, adding that even former Presidents Rawlings and Kufuor can also run for President because since they left office, two terms of Presidency have elapsed.

Dr Oduro Osae, who is also the Dean of Studies and Research at the Institute of Local Government Studies (ILGS), further explained that a break in the two terms renders the earlier term obsolete giving the former Presidents the opportunity to restart the two terms all over.

“If today we vote and he [Mr Mahama] wins and he comes, he can spend the four years and come for reelection for another term because there was a break in the term and that’s what we have to take a critical look at in our Constitution.

“And it is not in the Constitution that after serving two terms, you cannot contest again so people were suggesting for interpretation from the Supreme Court if former Presidents Kufuor and Rawlings can come back to contest. [This is] because the Constitution says you cannot go for more than two terms but [it] does not debar a President who has served his two terms of office from contesting in any future date,” he averred.

Chairman Wontumi, however, insists he will subsequently petition Parliament and the Electoral Commission to urge them to prevent Mr Mahama from seeking another term in office and also proceed to the Supreme Court for interpretation of that section of the law.