Tony Lithur, the lawyer who defended then President John Dramani Mahama in the landmark 2012 Presidential Election Petition at the Supreme Court, has triggered a process that will enable him to divorce his wife, Nana Oye Lithur, a former minister of state.

Papers reportedly filed at the Divorce and Matrimonial Division of the High Court in Accra on May 2, 2018, which have found their way into both social and mainstream media, revealed what can be described as explosive contents as grounds for the divorce.

Serious allegations like infidelity, aggressive or violent behavior, abuse, pilfering, and non financial commitment to the household, among others, are flying in Mr. Lithur’s suit although the respondent Nana Oye Lithur, a popular human rights activist and lawyer, is yet to file her response.

Unconfirmed reports say a colleague lawyer who was also part of the NDC team that defended the party during the Presidential Election Petition heard in 2013 has allegedly been mentioned in the particulars as having an affair with a party in the case.

The entitlement a party is expected to receive at the end of the case is believed to run into millions of Cedis.

Mr. Lithur, who was the Board Chairman of Ghana Airports Company Limited (GACL) during the previous Mahama administration, confirmed yesterday that the suit is pending before the court, but in an emotional press release, he requested privacy for the family.

“My attention has been drawn to the publication on social media of the docket copy of a petition divorce I have filed against Nana Oye Lithur at the Divorce and Matrimonial Division of the High Court, Accra and some pictures of us. While acknowledging the existence of the filed petition, I would like to say that the process is an emotional and difficult one for us and our children,” he said, adding “I would, therefore, very respectfully and humbly, ask the general public to kindly give us, our children and loved ones, some privacy to deal quietly with this painful stage of our lives.”

The petitioner’s suit was filed through his lawyer, O. K. Osafo Buaben of Oseawuo Chambers & Co.

The Lithurs, considered a power couple in the country, have been married for 27 years, first under customary law on April 14, 1991 and subsequently under ordinance at Christ the King Church, January 16, 1997.

The petitioner stated that he took the final decision to commence divorce proceedings in 2017, soon after his wife had informed him that she was buying a mansion in South Africa for between $350,000 and $600,000, amidst other juicy bombshell revelations about their relationship which has obviously gone sour.

The leakage of the court documents has sparked heated debate, as some have argued that matrimonial cases are supposed to be heard in private and not necessarily for public consumption.

However, others are of the cynical view that the parties involved are public figures and a case involving them should be of public interest. 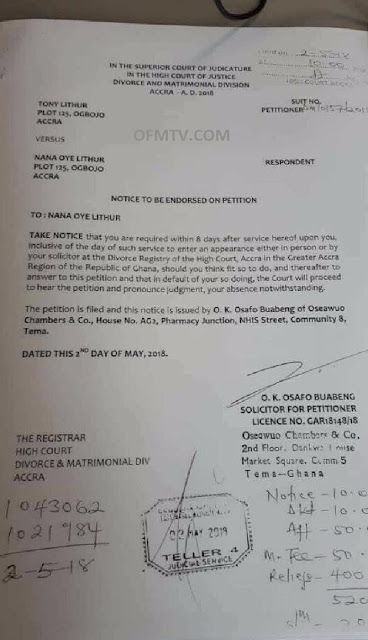 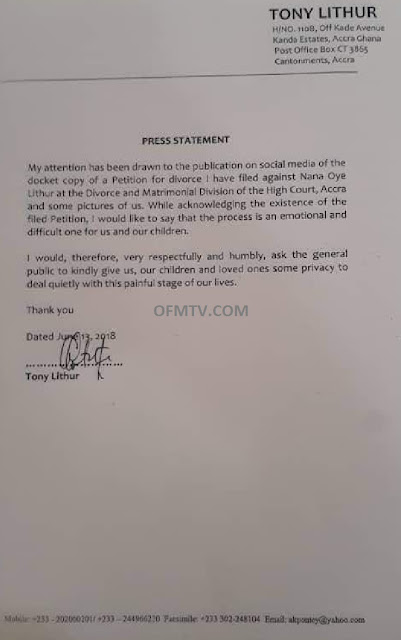 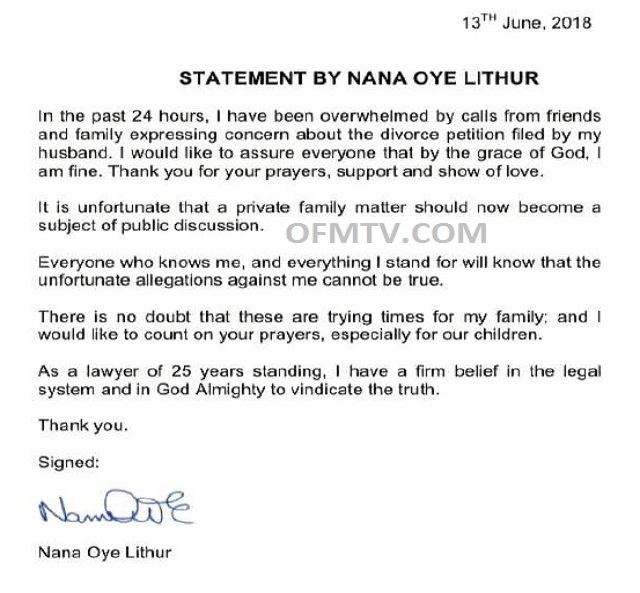