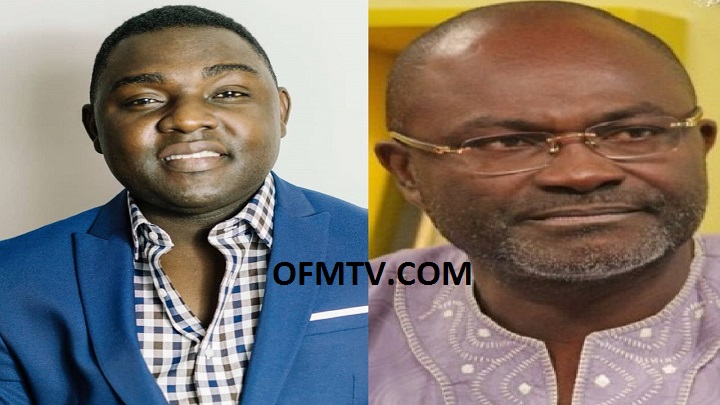 According to GhanaSky.com analyst, the newscaster Kevin Ekow-Baidoo Taylor has again throwing his documented facts and waiting for Kennedy Ohene Agyapong to respond.

Ghanaians need to wait patiently, at the end of the day the dust will settle and we all will see who is really credible in this political fight.

Kevin Taylor is a broadcast journalist in Ghana with extensive experience in radio and television broadcasting. In 2012, he founded Loud Silence Media in Accra.

Loud Silence is a production house specializing in human interest stories for local and international viewing.

Honorable Kennedy Ohene Agyapong is a Ghanaian politician and businessman who represents Assin Central in parliament for the New Patriotic Party.

He was first elected a member of parliament in 2000 to the seat of Assin North.
He retained his seat in the 2004 and 2008 parliamenary elections.
In 2012 he was elected in the new seat of Assin Central and was re-elected in 2016.

Ohene Agyapong was born in Assin Dompim in the Central Region of Ghana. Agyapong holds a GCE A Level and studied in the Fordham University, New York, USA. He is a farmer and businessman, director of Assin Farms, Supercare Group of Companies and Hollyood Shopping Centre. He is married with six children.

In 2008, Agyapong had an unsuccessful bid to be Presidential flag-bearer of his affiliated party, the New Patriotic Party, losing out in the first round. The party’s elected flag-bearer however lost the election.

In opposition, he criticized heavily the then National Democratic Congress government on various media platforms and found himself detained by presidential order of John Evans Atta-Mills, an occasion which sparked unrest on the political scene of Ghana.

He had made comments which the then head of state found threatening.

Many have pointed out that his comments on that occasion only pointed out the injustices to which members of the opposition party, particular market women, were subjected in parts of Accra when they turn out and tried to vote within certain constituencies.

Kennedy Agyapong chairs the Communication Committee in Parliament, under the current presidency of Nana Akufo-Addo.

Agyapong has vowed to commit suicide if former President John Mahama’s brother, Ibrahim, is not jailed by the Akufo-Addo government for some corrupt activities which, according to Agyapong, have led to the state losing money.

One example he claimed, was the defaulting of payment of taxes by Ibrahim Mahama for more than a year period when his brother was President of the Republic of Ghana.

Agyapong’s personal campaign on the issue to bring it to media attention led to the investigation of Ibrahim Mahama and subsequent agreement of Ibrahim Mahama to pay the said taxes. This action earned Kennedy Agyapong praises from a wide section of Ghanaians.

In 2018, following the arrest of Ghana Football Association president Kwasi Nyantakyi, he said that anti-corruption investigative journalist Anas Aremeyaw Anas should be stopped before he started investigating people in their “bedrooms whilst asleep”.

He has repeatedly threatened Anas and was condemned internationally by the Committee to Protect Journalists and Reporters Without Borders he stated that Anas’ methods were ‘unfair’.

Speaking live on Adom FM on 4 June 2018, he called Anas “a blackmailer, an extortionist”, mimed his throat being cut and said he should be “hanged.”

He also called for “retribution” against Anas’ fellow reporter, Ahmed Hussein-Suale, saying “If he comes here, beat him… Whatever happens, I’ll pay.” Hussein-Suale was subsequently assassinated.

In July 2018, he was cross examined for contempt of Parliament.

He is believed to be the first Ghanaian individual to own an ¢8 million Rolls Royce, and is believed to also own a private jet, sparking calls for an investigation from the Customs Excise and Preventive Service into his wealth.