I have learnt my lessons after NDC neglected me – Mzbel 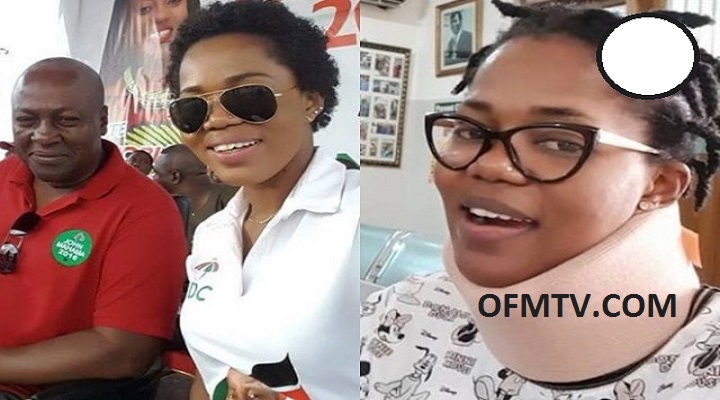 Hiplife artiste Belinda Nana Ekua Amoah, popularly known as Mzbel is upset with members of the opposition party National Democratic Congress (NDC) for refusing to show her love after she was temporarily stuck in bed after her recent accident at Labadi Beach in Accra.

According to her, she’s shocked by the uncaring nature of NDC members.

She stated in a Facebook post, Monday after the Deputy Minister of Health and Member of Parliament for Weija-Gbawe Constituency, Tina Mensah paid her a visit at home that, not a single member of her own NDC party has ever texted or checked up on her after the accident, despite her unflinching support to the NDC during and after the 2016 elections, an course she was severely criticized for yet never deterred her from supporting the party.

Mzbel stated that irrespective of Hon. Tina Mensah’s political background, she was amazed to see her show up in her house to wish her well even though she campaigned strongly against her during the 2016 election.

“For the love of my political party NDC, I offended a lot of people, jeopardised my career and was verbally abused, but that didn’t deter me to keep fighting for what I believed in.

It’s sad that I’m temporarily stuck in bed now due to a minor accident and not even a phone call or text message from any of the people I genuinely supported, to wish me well… And the amazing fact is that Honourable Tina Mensah, mother for my constituency, the woman I strongly campaigned against rather visited me yesterday when she heard about the accident.
I am learning my lessons and I’d also want to appreciate madam MP for the love and care, even though we were on different sides, God bless you… You are just too real *Teary Eyes*

If I had died, the story would have been different with big speeches and donations… Oh my people!

Mzbel was involved in a motor accident at Labadi Beach in Accra on May 10, 2018.

She was spotted riding motor bike with her friend who had just returned from America when the unfortunate incident occurred.

Mzbel’s friend lost control and clashed with the singer’s bike in the process and was quickly rushed to a hospital in Accra. Reports say she is responding to treatment.

Watch Afia Schwarzenegger in the video when she visited MzBel at home: