Ghana vs Benin (2:2) Highlights And All Goals, Ten-man Ghana held by Benin in Ismailia Egypt AFCON 2019 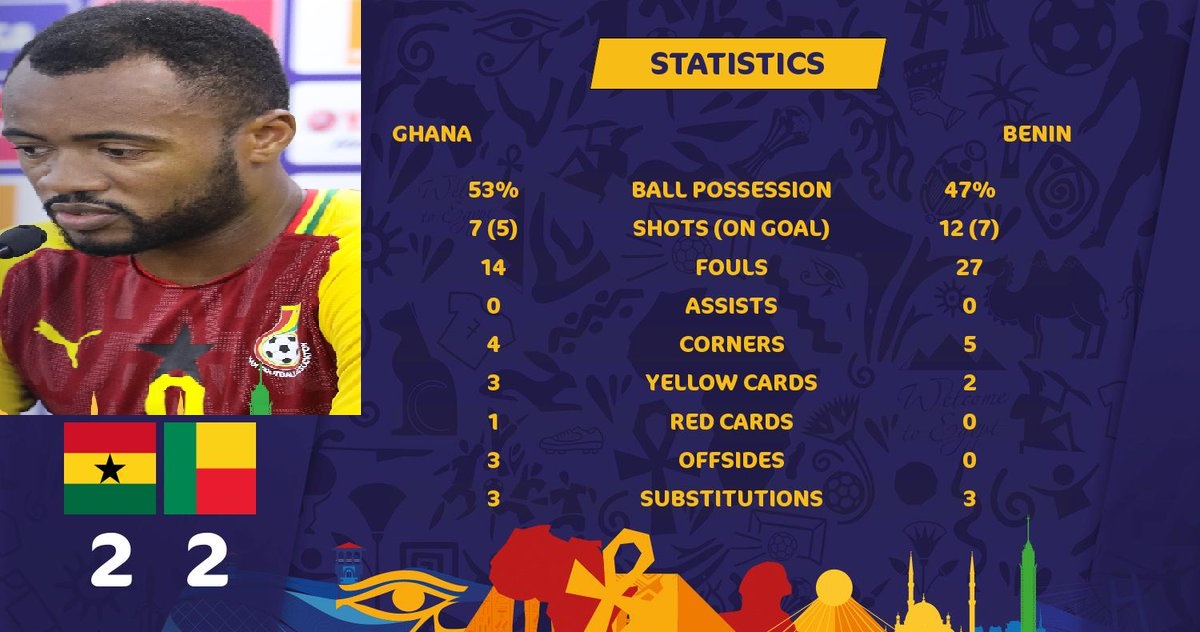 Goals from the Ayew brothers, Andre and Jordan saw 10-man Ghana play to a 2-2 draw with Benin in their Group F match in Ismailia on Tuesday evening. Jordan and Andre scored just after Mickael Pote had given Benin the lead.

Ghana was reduced to ten men in the 54th minute after John Boye was given his marching orders following a second yellow card for time wasting. Shortly after Benin were handed the numerical advantage, they raced back from 2-1 down to tie the game with Pote completing his brace.

Jordan finished off the first half in a smashing way, planting the ball into the roof of the net after taking a delightful turn to evade a challenge from Olivier Verdon. Ghana had come from a goal down after a fast-paced opening ten minutes yielded two, one each for the West African rivals.

Benin opened the scoring after just one minute and 44 seconds, Pote beating Richard Ofori from close range after racing into the box from 45 yards out and evading a challenge from Lumor Agbenyenu.

Watch Ghana vs Benin (2:2) Highlights And All Goals

Ghana responded just seven minutes later with a goal made from the Abedi Pele household. Jordan took on a run on the right with his cross deflected into his brother’s path. Andre controlled before taking a low shot on the turn planting the ball into the bottom left corner.

This was Andre’s ninth overall AFCON goal. Also, the Ayew brothers have scored seven of Ghana’s last nine goals at the competition.

The Black Stars were forced into a change 35 minutes into the game when Thomas Agyepong went out injured and was replaced by Samuel Owusu. Owosu almost made an impact three minutes after coming on, his run from midfield ending up in a left footed shot that went wide.

This was just minutes before Jordan showed up with some moment of insane beauty.

In the second half, Ghana’s resolve was slowed down by Boye’s second yellow, just nine minutes after the restart. Pote then completed his brace in the 63rd minute with a nifty backheel from the edge of the six yard box off a corner.

Thomas Partey almost restored the lead for Ghana but his well taken freekick attracted an equally good save from Benin keeper Fabien Farnolle.

The result leaves Cameroon at the summit of Group F on three points, Ghana and Benin trail on one point each with Guinea Bissau at the foot of the standings with no point.