France vs Argentina [4:3], France’s Kylian Mbappe at FIFA World Cup 2018 was so fast that he makes quick players look slow but he sent Lionel Messi and co home 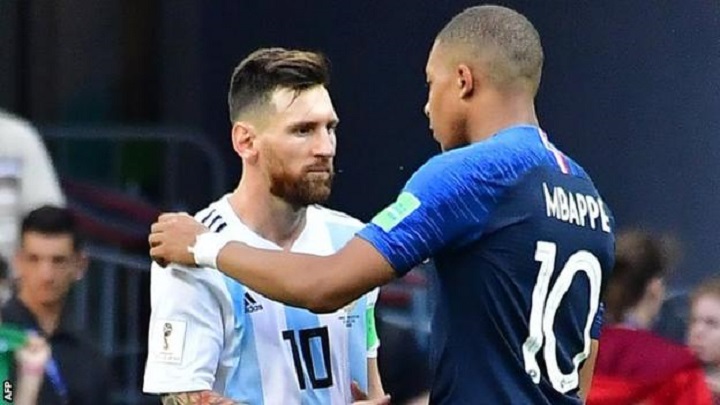 1. Kylian Mbappe announced himself
on football’s biggest stage with two fine goals that gave France victory
in a classic World Cup encounter with Argentina, and a place in the
quarter-finals.

3. France’s Kylian Mbappe became the first teenager to score at least twice in a World Cup match since Pele netted twice for Brazil against Sweden in the 1958 final.

5. France’s Kylian Mbappe was so fast that he makes quick players look slow. What a speed, according to GhanaSky.com

6. France are into the quarter-final! Argentina are out!

7. Though much of the focus before the game was on
Argentina superstar Lionel Messi, it was Mbappe who produced a brilliant
performance that will linger long in the memory.

It is one of the gifts of being the most talented teenager footballer in the world that Kylian Mbappe makes fast defenders look slow and slow defenders look ridiculous, although in the end this was about bigger things than just a first half demolition of poor old Marcos Rojo.

Mbappe’s
second-half double turned the game decisively in France’s favour, and
inflicted more pain on Argentina in what may be their final chance to
win the World Cup during Messi’s prime.
In doing so, the 19-year-old became the first teenager to score two in a World Cup match
since Pele netted twice for Brazil against Sweden in the 1958 final.


Antoine Griezmann had already hit the bar with a free-kick by the time he put
France ahead from the penalty spot in the ninth minute, following a
searing Mbappe run that was ended by a clumsy Marcos Rojo foul.

Argentina
looked unable to reply for much of the first half, until Angel di Maria
hauled his side level with a stunning long-range curler shortly before
the break.

Thousands
of raucous South American supporters were sent into raptures when
Gabriel Mercado diverted a Messi shot past Hugo Lloris to give Jorge
Sampaoli’s side the lead.

But Benjamin Pavard’s stunning strike
levelled the scores, and 11 minutes later Mbappe had scored twice – two
clinical finishes that ensured the 2014 beaten finalists would be going
home at the last 16.
For the first he swept body and ball into
space before driving past Franco Armani to score, while the second was
swept in crisply at the end of a counter-attack as Argentina chased
another leveller.
Substitute Sergio Aguero did get a late consolation – a low header from a pin-point Messi cross in the 93rd minute.

Despite
their obvious attacking talent, there were still plenty of questions
around this France team after a group phase during which they never
really hit their stride.
Les Bleus qualified comfortably as Group C winners but laboured to a win over Australia, beat Peru unconvincingly then played out a dire draw with Denmark, the only 0-0 of the tournament so far.
They
must have just been waiting for the knockout stage to start, because
here we finally witnessed the kind of blistering display many expected
sooner, with Mbappe the embodiment.

‘Glorious’ Pavard strike brings France level
His run for the penalty was sensational, pure athleticism coupled
with bravery and belief as he drove past defender after defender; all
Rojo could do was haul him down. His two goals were not bad either.

Responding
to concerns about his team’s style, manager Didier Deschamps had made
the point that under his watch tournament progress is only building in
momentum.
In 2014 there was the World Cup quarter-final loss to
winners Germany, then the Euro 2016 final defeat by Portugal in extra
time.
And the Portuguese could be next for a team looking very dangerous indeed.

What now for Messi and Sampaoli?

This
is an Argentina team around which there seem to have been so many major
issues, with rumours of dressing room discontent, reports Messi was
calling the shots in team selection, and a sense they were simply not
getting the best from the five-time Ballon d’Or winner.
During the
nine minutes after the Mercado goal that put them ahead early in the
second half, all was forgotten in the stands packed with
light-blue-and-white striped shirts.
But Mbappe’s brilliance – after Pavard’s stunning equalising goal – brought them crashing back to reality.
That reality is this could well be the end for a generation that has failed to win a major title despite promising so much.
Di Maria levels for Argentina with ‘a shot from the heavens’
This last-16 exit follows three consecutive defeats in major finals –
the World Cup in 2014, the Copa America in 2015, and the special
centenary Copa America in 2016.
After that third final defeat, Messi announced his retirement, before changing his mind a month later. Six days ago he turned 31.
Following
the final whistle here, all of the Argentina players lingered long on
the pitch, only leaving after France had. Messi was first down the
tunnel, with his head bowed and the captain’s armband in his hands. 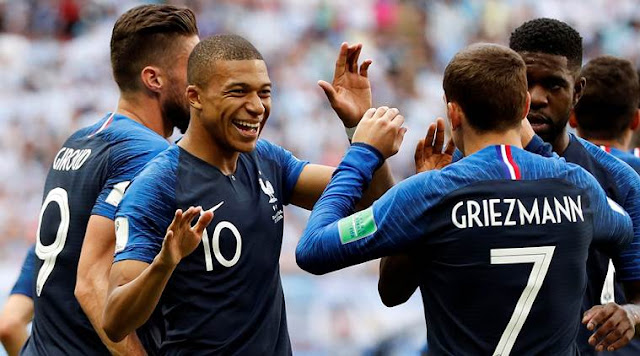 ‘I won’t decide my future today’ – what they said

Argentina boss Jorge Sampaoli: “This is very painful, especially because the players have made a huge effort.
“It
was a very difficult game but we have not achieved our goal here in
Russia. I’m sad, I’m frustrated – I think that’s quite normal.
“I won’t decide my future today.”
France boss Didier Deschamps:
“Our team is much younger, but it’s there. We answered the call, we
have a lot of character and it was not easy as we were leading, then
there was an equaliser, then we were 2-1 behind, but we kept fighting.
“There
is an excellent mentality in this group and we did everything to go
further. Since I am responsible for everything, particularly when it
doesn’t go well, I’m very proud.”
Man of the match Kylian Mbappe:
“It’s flattering to be the second teenager to score twice in a World
Cup match after Pele but let’s put things in context. Pele is another
category, but it’s good to be among these people.
“As I’ve already
and always said, at a World Cup you have all the top-level players, so
it’s an opportunity to show what you can do and what your abilities are.
There’s no better place than a World Cup.”

Messi yet to score in World Cup knockout stage – the stats

One thought on “France vs Argentina [4:3], France’s Kylian Mbappe at FIFA World Cup 2018 was so fast that he makes quick players look slow but he sent Lionel Messi and co home”