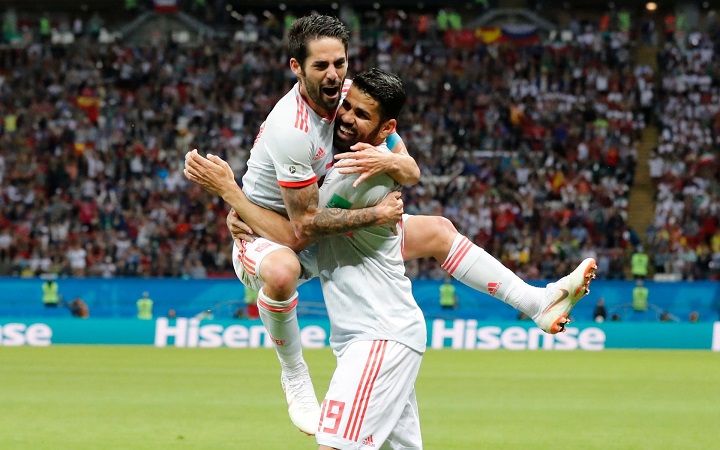 Diego Costa’s strike was the only thing to separate the two sides. The scoreline will record that Spain beat Iran 1-0, to ease their way towards qualification for the last 16. But rarely can a victory have been as hard won. Never mind the kitchen sink, Spain’s players must have felt as if the entire contents of the local porcelain factory had been hurled in their direction. Rarely can the old coaching maxim of don’t leave anything on the pitch have been so played out as it was by this Iran team. They were simply magnificent in their collective obduracy. Against their elevated opponents, Iran’s players gave their all, several of them collapsing to the turf on the final whistle, exhausted by their heroic effort.

For Sardar Azmoun this was a home fixture. Iran’s lone striker plays for Rubin Kazan in this stadium. But he can never have known it as noisy as this. The 20,000 Iranian fans in attendance filled the place with an incessant row. Many of them had come from Tehran armed with their own particular instruments of torture: the plastic horn. It was like 2010 all over again, the stadium resounding to the sort of soundtrack we had hoped was consigned to history after the South Africa World Cup. But no, this was a bad case of deja vuvuzela.

And nothing seemed to suppress the row. From the first moment an Iranian player touched the ball, a gathering swell of noise burbled up.

If there is any team in the world who can be relied upon to suppress the excitement of the opposition supporters it is Spain. And as the slick, sophisticated interchanges of Andres Iniesta, David Silva and Isco began to form intricate patterns across the turf, it seemed silence would soon descend.

But these Iranian fans were made of sterner stuff, refusing to be cowed by Spain enjoying 81 per cent of the first half possession. With a huge contingent of women amongst their support, many enjoying the freedom of dispensing with the dress code of home, they provided a field day for the Russian television director who likes his cameras to pick out attractive females. Male or female, however, they did not stop their constant bellow.

Iranhad not lost in 22 competitive matches since the last World Cup (they were beaten on penalties in the last Asian Championship). In 18 of those games they kept clean sheets. And here was vivid demonstration of how they did it: they defended as if their life depended on it.

But Spain came out from half time with a flurry, determined to quell the resistance. Busquets long range shot was saved by Beiranvand, who then scooped the ball away from Vasquez.

For a moment it looked as if such profligacy might be costly. From a long Iranian throw the ball fell to Karim Ansarifard, the Olympiakos player, who hammered a shot into the side netting. But then, on 54 minutes, Costa barrelled into the box, twisting, turning, snorting. Rami Rezaien tried to tackle him, but the ball bounced off Costa’s knee beyond Beiranvand’s reach. It was a very Costa-ish goal: belligerent, bullish and suffused with good fortune..

Now Iran had to change tactics, hanging on for the point was no longer an option. Queiroz sent on Alireza Jahanbakhsh, of AZ Alkmaar, the only Asian to top the scoring tables in any top European league.

And Iran did have the ball in the net when Saaid Ezatolahi bundled home in a goal mouth scramble, But the referee brought the premature celebrations billowing in the stands to a shuddering halt by referring the incident to the video assistant, who informed him there had been an offside in the build up.

But Iran were nothing if not determined. Now bellowed on by their wonderful support, they kept trying to get the ball up to Azmoun and Jahanbakhsh, kept trying to break through Spain’s careful possession.

But no matter how they toiled and sweated Iran were up against opponents who know better than any side in international football knows how to kill a game. They made their triangles, they took an age on every set piece, Costa ambled off when substituted as if on an afternoon stroll. And crucially, for all their magnificent intensity, Iran had no Cristiano Ronaldo to deliver a point out of nothing at the death.