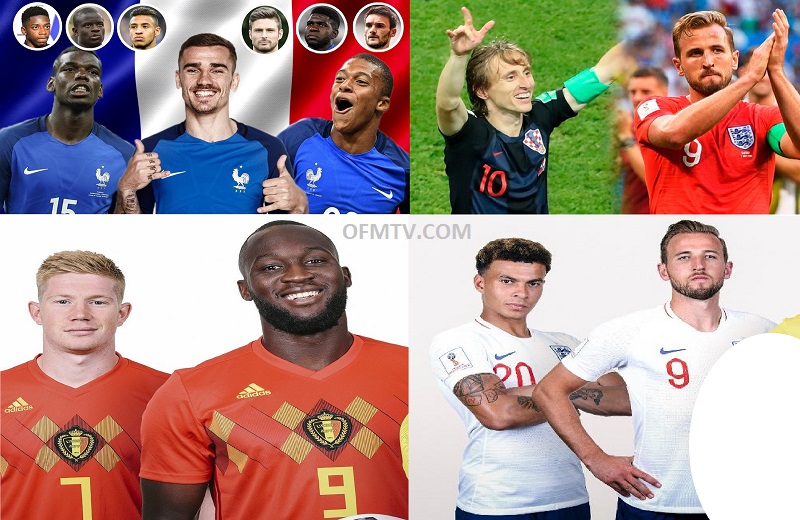 Fixtures of France vs Belgium and Croatia vs England Matches, Time Table in Ghana time, in Nigeria time, in Europe time, in Africa time etc.

Eleven own goals have been scored during the tournament, breaking the record of six set in 1998.

France vs Belgium at St Petersburg, Russia on Tuesday, July 10, 2018.
People from across the globe seem to have more belief in Belgium than the locals do.  Various media had a lot of positive things to say about Belgium after their win over Brazil. Here is the one from Globo Esporte: “This team goes to the semi-final with the status of favourites for the title. It is a mature team ready to make it. Against Japan, their main challenge will be to prevent France,s Mbappe having space, but it should not be a problem as this team seems capable of reinventing itself.”
The Red Devils are certainly good Ambassadors. Most of them speak three languages, but Thibaut Courtois, Romelu Lukaku and Vincent Kompany speak at least five according GhanaSky.com report through FIFA.

Croatia vs England – Moscow (Luzhniki), Russia on Wednesday, July 11, 2018.
Croatia coach Zlatko Dalic is a clever and resourceful boss who is getting the best out of a talented group of Croatian stars.

FIFA World Cup 2018 Players with highest goals and still active in the competition:

Russia, the world’s largest nation, population of 144.3 million with it’s capital Moscow, borders European and Asian countries as well as the Pacific and Arctic oceans. Its landscape ranges from tundra and forests to subtropical beaches. It’s famous for Moscow’s Bolshoi and St. Petersburg’s Mariinsky ballet companies.