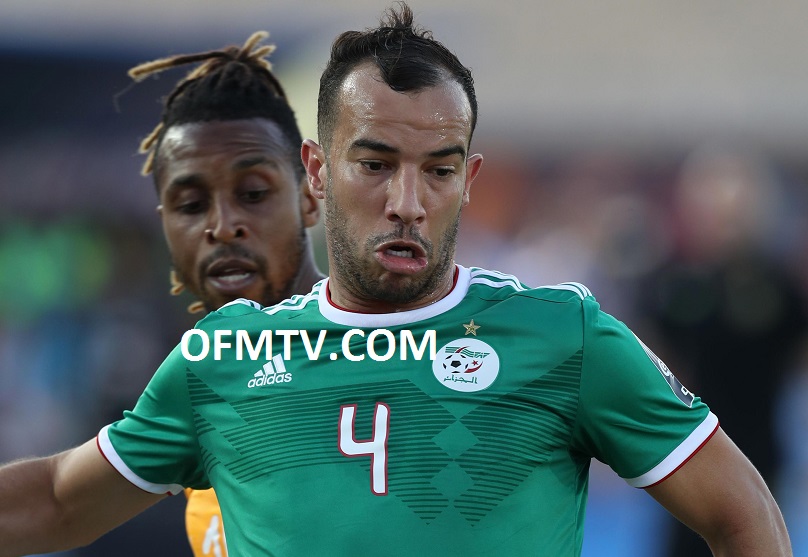 Djamel Benlamri of Algeria challenged by Wilfried Zaha of Ivory Coast during the 2019 Africa Cup of Nations Finals, quarterfinals match between Ivory Coast and Algeria at Suez Stadium, Suez, Egypt.

Algeria reached the last four for the first time since 2010 after beating Cote d’Ivoire 4-3 on penalties in their quarter final clash on Thursday in Suez. Algeria will play Nigeria for a place at the final on Sunday in Cairo.

The encounter ended one-all after 120 minutes with Turkey-based Sofiane Feghouli scoring in the first half for Les Fennecs whilst Jonathan Kodjia levelled in the second half. The North Africans had the luxury of missing a penalty early in the second half when Baghdad Bounedjah shot at the cross-bar, but had the last laugh on penalties.

It was yet again another painful exit for Les Elephants who have failed to make an impression since winning their second AFCON title in 2015 in Equatorial Guinea. The Ivorians, champions also in 1992, failed to go past the group stage in 2017 in Gabon.

In the early parts of the game, Les Elephants should have broken the deadlock but Zaha after doing all the work, squared to Jonathan Kodjia, but the latter failed to trap the ball.

Les Fennecs broke the deadlock on 20 minutes through Sofiane Feghouli, who connected a cross from Rami Bensebaini from the left, that caught Ivorian goalie Sylvian Gbohouo for the opener.

Algeria had the better of the exchanges with Rahman and Baghdad Bounedjah having shot at goal as they tested the Ivorian backline.

The Algerians resumed strongly and were awarded a penalty after Gbohouo felled Bounedjah in virtually the first attack of the half. However, Bounedja shot at the crossbar to the dismay of all.

And that was the turning point for the Ivorians, who raided the half of the Algerians in search of the equalizer.

The Zaha-Kodjia partnership will return to haunt the Algerians yet again on 62 minutes as Kodjia drew level. On the counter, Zaha tore through and laid to Kodjia, who beat his marker before firing a low shot past Rais M’bolhi for the equalizer.

Gbohouo was to the rescue of the Ivorians with timely saves within a spate of three minutes each denying Bounedjah, who was looking to make amends from his miss from the spot. The TP Mazembe shot stopper stopped Bounedjah goalbound shot on 65 minutes and three minutes later as he

With both sides failing to grab the winner, the game headed for extra time which saw Gbohouo and M’Bolhi make superb saves to force the game to penalties which saw the Algeria win 4-3 and continue their fine run in the competition.