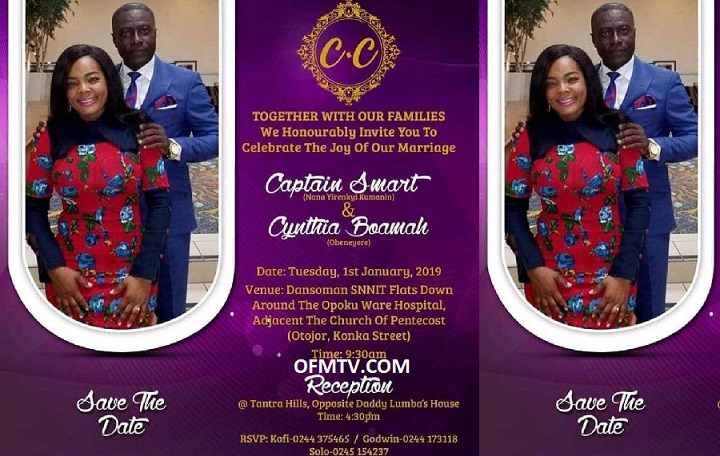 Classic wedding invitation of Adom FM’s Captain Smart and his new USA girlfriend, Cynthia Boamah has surfaced on social media and has so far garnered wild reactions from Ghanaians.

From the wedding invitation, the wedding ceremony will take place on 1st January 2019 at Dansoman SNNIT Flats Down, around the Opoku Ware Hospital, at 9:30 am with a reception to be held later at 4:00 pm at Tantra Hills.

Being a chief, the invitation is themed like a royal event and from friends closer to Cynthia Boamah aka Akosua Dwamena, she is the happiest person right now.

When the man came out and accused Captain Smart of snatching his wife with whom he has 3 children, Captain Smart shrugged him off and even mocked the man with Afia Pokuaa in series of comments.

Interestingly, Captain Smart dumped Afia Pokuaa few months after the death of the man in the United States.

Ghanaians found out about this turn of event when Captain Smart publicly proposed this new girlfriend in the United States. He was severely bashed by Ghanaians and his fans worldwide.

In his defense, Captain Smart revealed he divorced Afia Pokuaa before the other man died because the name calling was too much and he had to walk away.