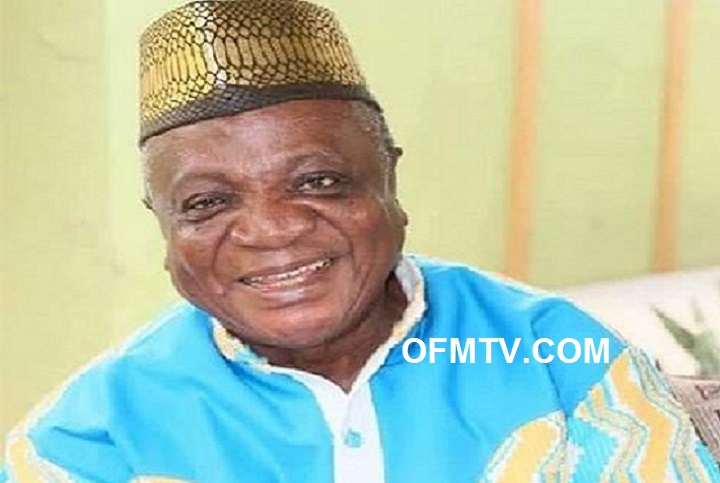 According to GhanaSky.com analyst, Nana Kwame Ampadu was born at Obo Kwahu on March 31, 1945 and was named Kwame Ampadu after his father.

The then head of the ASONA clan of OBO KWAHU in the Eastern Region of Ghana, and madam MERCY AFUA NTIRIWAA, a stanch presbyter also of Obo Kwahu.

Ghanaian highlife general Nana Kwame Ampadu was most popular highlife musician in the history of the genre and was a multi-talented artist.

GhanaSky.com confirmed the death of Nana Kwame Ampadu. He died on 28 September 2021 at the age of 76.

Ampadu was a Ghanaian musician credited with numerous popular highlife tracks and he is known to have composed over 800 songs.

Little Ampadu was enrolled into the OBO ROMAN CATHOLIC PRIMARY SCHOOL from 1950-1952 where his parents took him to the village Adeemmra near Aboam in the Afframs Plains and had continuation of his schooling from class three to standard three (3), now class six and completed the junior or primary school in 1955. 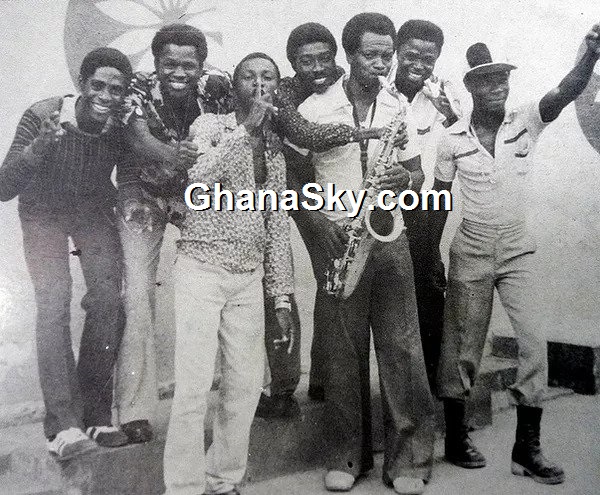 Ampadu developed keen interest in singing at school and had a very tantalizing and captivating voice to the admiration of his teachers who proudly choose him to give the school tunes whenever it was called for.

Kwame Ampadu furthered his elementary school at OBO ANGLICAN MIDDLE BOYS SCHOOL from 1956-1959 and came out successfully as a brilliant form four leaver.

At the senior school, the Obo Anglican Middle Boys authorities including teachers took delight in the cute figure Ampadu not for his brilliance only but his artistic exuberance in singing.

This made the head teacher, one Master Ouarcoe proud to robe him as a chorister and also appointed him as the only tune picker at all times.

Before Amapdu finished his elementary school, he had sat and passed the West African Examination council’s common entrance in 1957 and gained admission with half scholarship to ABUAKWA STATE COLLEGE but his father expressed his financial incapacitation and thus young Ampadu had no option than to finish the Middle School after which he proceeded to Accra to join some relatives to find a job.
Ampadu was so cute and tiny that people took him to be a child and would not be convinced that he was a middle school leaver who could be considered for a job. This was in 1960.

After a few months of sojourn in the capital city, Accra, Kwame Ampadu or this time Patrick Kwame Ampadu was called to take a job as a messenger with the Ministry of Agriculture at Kwahu Mpraeso.

His father, it was learnt has sought this job for him. Ampadu took this challenge and did remarkably well with his employers and officials of Agric Ministry.

It was during this period that Patrick Ampadu saw that he had been blessed with a gift of composition.
Though he was not near an instrument he was able to compose songs, which he repeatedly sang them and retentive as he was with his memory, never forgot them.

Ampadu, at times sang to entertain some of his friends and admirers. Before he could see the 10th month of his employment he abandoned his post and fled to Accra again.

A schoolmate, one Noah, who was a guitarist, had gone to invite young Ampadu to quit his job to come and join him in Accra where they would manage to form a band.

So, he finally arrived in Accra, but upon inquiries about Noah he became disappointed, Noah has gone to Agogo and from indications, he was not coming back to stay in Accra.

Ampadu, though disappointed, never lost hope. His brothers and sisters, four of them were in Accra so he settled with his immediate senior brother, Rover Amo Ampadu who incidentally became the manager of African Brothers Band International since it’s formation.

One of his relatives Nana Nyarko, who was an executive member of Yamoah’s Band, introduced little Ampadu to Mr. P.K. Yamoah, the leader and founder of the band who auditioned and employed him as a treble singer.

But his zeal and interest in singing for Yamoah’s band was dashed when Mr Yamoah decided to go and stay in Kumasi, the Ashanti Regional capital with the group and requested if he would like to go with him.

The boy’s relatives would not give in to such propositions, in that he was still a small boy and they felt it was not safe for him to stay in Kumasi.

The next option was to look for some work to do. Some of the scores of applications letters he sent to various institutions and departments’ yielded results and one of them, the United Ghana Farmers Council Corporation.

They employed him as a messenger and later as a canteen supervisor. Before then he had served one Mr. Ansong, the proprietor of Faith Drug Store in Okaishie, Accra in 1962. He also worked with the U.G.F.C.C from 1963-1966.

As there is the root to every tree, it is inevitably important to recount the events that led to the formation of the African Brothers Band.

There was a young and cute figure of a boy by name Patrick Kwame Ampadu who was always seen with his guitar hanging around his neck on the streets of Accra between the later part of 1961 and the full year of 1962 One of the founding members was Eddie Donkor.

During all these years, young Patrick Ampadu has not less than 50 good compositions but no producer or publisher would even give him and his group audition to access their capabilities, because they were small boys.

In those days it was not common to see small boys becoming public entertainers or singers. However, they were not in the least daunted and continued to play at funerals and Hausa or Moslem weddings called “suuna”.

In fact, the group was a delight to watch when they performed even though they played with worn-out musical instruments.

Later around 1964, Joe Dee, an electrician and Oppong Kyekyeku joined the group as Bass player and tenor singer respectively.

In 1964, young Ampadu met Mr Jerry Hansen, leader and founder of the Ramblers Dance band and cultivated his acquaintance where Ampadu gave Jerry eight songs in all for free which the Ramblers Band recorded.

Some of the songs are Ntoboase, Afutusem, Scholarship, Me Nsoromma Bepue. All these songs became hit tracks.
One good turn deserves another. Mr. Jerry Hansen seeing the musical competence in Amapadu, introduced him to Phillips West Africa Ltd., a recording publishers and Ampadu was given the chance to record two single tracks for a 45 R.P.M release.
The maiden recording was done at the Ghana Film Industries Corporation (G.F.I.C) on the 14th of November 1966.

The 1st track that was recorded that day was Agyanka Dabere with Suminaso Ntonko as the flip side.
This single was released on 21st December 1966. The single album became an instant hit and served as a beginning of a new era in the guitar bands sector.

The thought provoking nature of the lyrics in those two title tracks, made many people felt it was some old or veteran musicians who sang these songs.

From this stage, promoters and producers chased the group for recording and performing engagements.
It was no wonder that in early 1967 the group went to stay in Kumasi under the invitation and sponsorship of a hotelier, the proprietor of Ambassador Gardens in Asem, Amakom.

At the tail end, the African Brothers Band settled with “D.K NYARKO” of OBOUBA RECORDS and HAPPY BIRD labels.

Having formerly recorded for the Ambassador Records of Kumasi and the G.F.I.C in 1967 the mutual and verbal contract was signed with Mr D.K Nyarko who provided accommodation and musical instruments as some of the pertaining contractual agreement.

In 1967 alone, the group recorded 8 songs for the Ambassador records and 16 songs for G.F.I.C. Between 1968 and 1978 where Nana Ampadu requested for the abrogation of it’s contract with Mr. D.K Nyarko, the group had released not less than 400 single tracks.

The final was held in at the REX CENEMA in Accra and in the end, the African Brothers Band Int. emerged as the winners and P.S.K AMPADU was crowned at the Arts Council of Ghana by the state on FEBUARY 10TH 1973 where the title of NWONTOFOHENE NANA KWAME AMPADU was conferred on him.

In his private life, Nana Kwame Ampadu married a wife, YAA HEHEWAH in 1968 and had two children, all boys with her.

The marriage broke after ten years during when Nana Kwame has another wife CECELIA DEDE and had a daughter with her.

MOM BEE, who was also a musician, was married to Ampadu and they were blessed with another boy. Nana met and married Akoua Agatha (Agatha) an Ivorian lady in 1981.

But three years after, the marriage broke. As at the time of filing this profile, Nana has a wife, Nana Yaa Fosua who was married in 1992 and has two children, a boy and a girl with her in the names of OHENEBA YAW RAWLINGS AMPADU, Who was named after his Flt. excellency JERRY JOHN RAWLINGS, former president of Ghana who was Nana’s spiritual friend and Davida Yaa Kesewaa.
Currently Nana Ampadu 1 had eight children and their names are as follows:

Nana Kwame Ampadu was himself a footballer and was also once an executive member of Accra Hearts of Oak and Okwahu United.

His other hobbies are indoor games such as Draught, Ludu and also Table Tennis.
Nana Kwame Ampadu is a staunch Christian and presently an Evangelist of Jesus Christ and a member of Center for Christ Mission in Achimota.

Nana Kwame Ampadu came to prominence in 1967 when he released his song Ebi Te Yie (or “Some Are Well Seated”), a song that was seen as potentially critical of the then-governing National Liberation Council and disappeared from the airwaves, only returning after the end of military rule.

In 1973 he won a nationwide competition in Ghana to be crowned the Odwontofoohene, or “Singer-in-Chief”.

His musical career also involved him in electoral politics, including composing a song for Jerry Rawlings’s National Democratic Congress party to use in the 1992 election campaign.
Ampadu also released a song critical of an attempt to disqualify Rawlings from the 1992 election based on him being half-Scottish.

Crowned NNWONTOFOHEHE by the Arts Council of Ghana in 1973 with the National stool name of “Nnwontofohene Nana Kwame Ampadu 1”.

Received several awards between 1981 and 1998 at Legon Hall, University of Ghana; Rex Image Associates, ECRAG, COSGA & ACRAG.
All in respect of the tremendous role and contribution for the upliftment of our cultural heritage through music.

Awarded State Grand Medal Award in 1997 by the President of Ghana, his Excellency FLT. LT. J.J. RAWLINGS. Composed the signature and theme song for Operation Feed Yourself in 1974(N.L.C).
Some of the indelible achievements of Nana Kwame Ampadu 1 & his African Brothers Band are that, in 1973, the group stopped playing copyright music and concentrated on their own.

Nana Ampadu was the youngest to have leadership in a band at the age of nineteen in 1963. So far it is believed the African Brothers Band has recorded the largest number of title tracks totaling about 700 at the time I did this interview with Nana Ampadu.