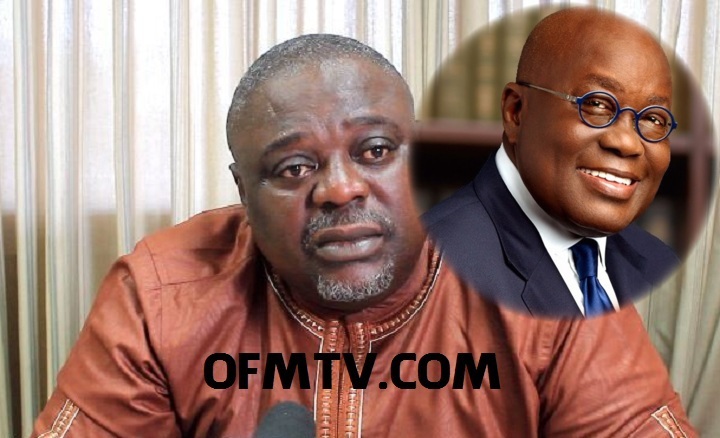 Deputy General Secretary of the opposition National Democratic Congress (NDC), Koku Anyidoho, has predicted that, President Nana Akufo-Addo, will be overthrown just like his father and the late K.A Busia, due to the ratification of the controversial military pact deal between Ghana and the United States.

Speaking to Kwame Afrifa Mensah on Happy FM’s ‘Epa Hoa Daben’, the outspoken politician said, “someone should tell President Nana Akufo-Addo that, history has a way of repeating itself”.

“On the 13th of January 1972, a certain Colonel Ignatius Kutu Acheampong, led a movement that removed the progress party from power. Busia was the Prime Minister; Akufo-Addo’s father was the Ceremonial President. Somebody should tell Nana Akufo-Addo that, history has an interesting way of repeating itself.’’, he reiterated.

When asked to clarify his statement the deputy scribe of the umbrella family maintained that, history has a way of repeating itself.

“There will be a civilian coup d’état. There will be a social revolution. We [NDC] are starting it on Wednesday. The movement is starting on Wednesday. Nana Addo will have sleepless nights. He will suffer diarrhea. He said he wanted to be president but we will make sure he will be fed up on the seat,’’ he noted further.

Koku Anyidoho warned that there will be a civil revolt and a movement due to the ratification of the agreement which has been widely criticized by some security experts and the general public.

The NDC Minority in Parliament has accused the Akufo-Addo-led administration of selling Ghana’s sovereignty to the US government because of $20 million.

Ghana, per the agreement, is to bear the cost and take primary responsibility for securing their facilities while the troops are in the country.

The US troops are also to be allowed to use Ghana’s radio spectrum for free. They will also enjoy tax exemptions.

The agreement will permit the U.S. Military to use Ghana as a base for staging and deploying forces.

Despite the unrestricted access and tax exemptions, Ghana has also agreed to bear the cost and take primary responsibility for securing the U.S. facilities in Ghana.

According to the agreement Ghana will provide unimpeded access to and use of agreed facilities and areas to the U.S. forces and Contractors.

It also allows U.S. forces and their Contractors to undertake construction activities on and make alterations and improvements to agreed facilities and areas.

The U.S. forces are also authorised to control entry to the facilities meant for the exclusive use of their forces.

Ghana has also agreed to “furnish without rental or similar costs to the united states all agreed facilities and areas including those jointly used by the United States Forces and Ghana.”

The U.S. Forces may also import into and export out of, and use in Ghana any personal property equipment supplies material technology, training or services in connection with the agreement.

But most importantly such importation, exportation and use shall be exempt from any inspection, license other restrictions customs duties taxes or any other charges assess within Ghana.

The agreement also states that “aircraft, vehicles and vessels operated by or at the time, exclusively for the United States Forces may enter exit and move freely within the territory and territorial waters of Ghana.”