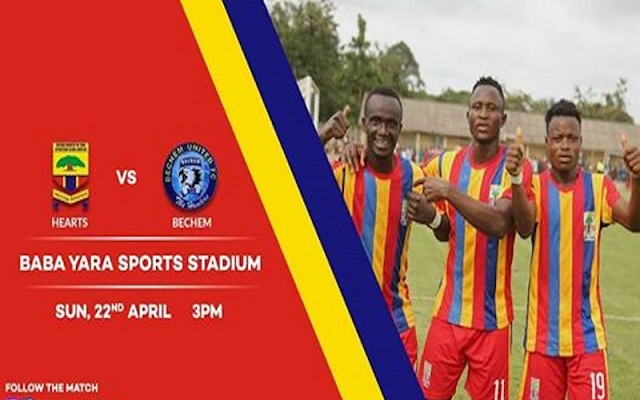 Accra Hearts of Oak were held to a 1-1 draw game by Bechem United at the Babayara Sports Stadium on Sunday.

Patrick Razak came off the bench to score late in the game and cancel out Hafiz Konkoni’s early strike in the first half.

The Phobians missed a lot of good chances to find the leveler but they were mightily relieved when Razak rounded the keeper to claw a point from the jaws of defeat for Hearts.

Assistant Coach Edward Odoom, taking charge for the second consecutive game in the absence of Henry Wellington, who’s recovering from illness, made four changes to the side that lost to Karela in midweek.

Theophilus Jackson was handed his first league start in Hearts colours whilst Fatawu, Akrofi, and Cosmos returned to the starting XI.

But it was a calamitous start for the former WAFA goalie, who blundered in as early as the fifth minute of the game to allow Bechem to take the lead. Jackson failed to deal with an innocuous cross from the right side, letting the ball slip through his fingers for Konkoni to walk the ball home.
Hearts had come into the game with full determination but the manner of the goal sapped away their confidence.

However, they battled their way back and pushed Bechem back for long spells. Cobbinah, Esso, Cosmos, and Kordie all went close but neither was able to put the ball at the back of the net.
Coach Odoom threw on Razak for Akrofi with five minutes to the end of the first half.

Hearts continued to press after the break and though they came mightily close on four occasions, a combination of diffident finishing and lack of luck ensured they could not find the back of the net.
Cosmos tested the Bechem keeper with a snapshot just after the break. Addo followed pretty shortly but he blazed over after latching on Bonney’s cross.

Then the Phobians began to stretch the Bechem defense but when the opportunities opened, they just could not finish.

Razak and Cobbinah combined in the box, but though the Hearts No.10 could not fire on target, the ball kindly fell for Cosmos at the back post but his effort was blocked on the line twice by the goalkeeper. Esso pounced on the rebound but he laid it for Bonney, yet the defender’s shot was headed off the line for a corner kick.

Hearts had done all they could to get the equalizer but they were finally rewarded in the last attack of the game. Addo sent a long ball from deep for Cosmos to chest and control before clipping it over the Bechem defense for Razak to chase.

The Hearts No.17 got to the ball ahead of the keeper and rounded him before slotting home to earn us a point.